Oh my stars and garters....

I've been meaning to blog for a few weeks now, but it seems like too much bizarre stuff keeps happening, from the sad (Haiti earthquake, Jay Reatard's death) to the strange (Conan's farewell to NBC) to the completely ridiculous (Sarah Palin on Fox News, seriously?), and it's been difficult keeping track of it all, let alone writing about it..

In my defense, I've had my own bizzare month I've had a hard time keeping track of.

First, I had a minor role in a commercial for an iPhone game that included electric guitars, skulls, fireballs, robots and mullet wigs.

On the way to the shoot, my timing belt went out on my car, ripping $400 out of wallet. Luckily, I had good friends nearby that were able to tow me back home (it was -30 and I wouldn't want my car stuck out in that).

While my folks are out of town, I'm watching their place, which comes with a few perks, such as the Netflix account. So far, I've watched It Might Get Loud, a documentary about the electric guitar starring The Edge, Jack White and Jimmy Page. One of the highlights was a clip of Jack with a custom-built Gretsch he uses for The Raconteurs, which has a built in retractable microphone at the bottom of the guitar.

The clip shows Jack in mid-shred position, with blood all over his otherwise pristine white guitar, followed by him pulling out the mic and howling into it like a banshee. I also really enjoyed The Edge and Page's respective back-stories, which I wasn't too informed of previously.

In addition, I got two Brendan Canty (Fugazi drummer) directed Wilco documentaries, both filmed in the Sky Blue Sky tour era. "Ashes of American Flags" is a live video filmed in classic venues like the Ryman Auditorium in Nashville, the 9:30 Club in DC, and Cain's Ballroom in Tulsa, OK.

The other, "Shake It Off" is a more intimate, in-studio documentary about the writing and recording process the band used on the Sky Blue Sky sessions.

I had a freakout moment when there was a clip in the latter film of keyboardist Mikael Jorgensen being interviewed inside of (what I'm pretty positive was) a Chicago guitar shop where I had my own amp worked on whilst on tour this last summer. Weird!!!

Then, another weird thing happened. When it was (no exaggeration) 40 degrees below zero, I saw, for the first time in Fairbanks, one of those goons on the street advertising for Liberty Tax, in the stupid Statue of Liberty costume. In -40! Who does that?! Too bad my skills of snapping iPhone photos while driving stick mid-intersection aren't up to snuff, because the following shot is worse than a Nessie sighting, but hey, I swear it happened. 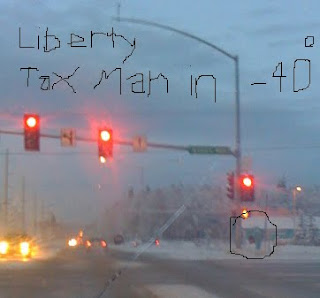 I also took up a cheeseburger eating challege: 25 McDonalds cheeseburgers in 24 hours before I turn 25. I made it to 12, then was sick all the next day. Barf! Might not be trying that one again. 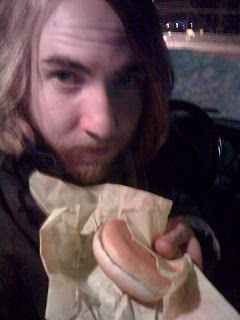 If all that stuff wasn't weird enough, I'd say the goofiest thing I got myself into was the local Pick Up Band League, a musical answer to pick up sports leagues.

The ever changing P.U.B. roster boasts both seasoned and amateur local musicians, who are placed into teams that intend to separate bandmates, couples, siblings, etc. so that we are all out of our element.

My band won the Golden Ukulele, which is the trophy for best band. We wrote one original song, and performed two mash ups, which, whether or not were well executed, were loads of fun.

The first was an auto-tune soaked mash up of Van Halen's "Jump" and Patsy Cline's "Walkin' After Midnight" (the vocoder really gave Cline's part a hefty post-2009 update). This was followed by a cover of Bloodhound Gang's mash up of Weezer's "Undone (The Sweater Song)" and the Wu Tang Clan's "Ain't Nuttin to F Wit".

I think my favorite part of the whole thing was our band name:

Our good friend, who was the announcer was so annoyed at having to remember our name! 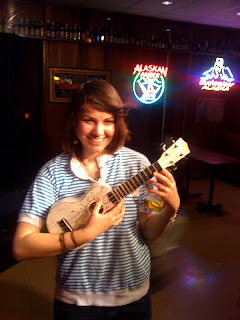 My teammate Ephy poses with our prize, the Golden Ukulele

I dare February to try to be weirder than this month, especially as it will be my last month in Alaska for quite some time.
Posted by art so troublesome at 12:39 PM