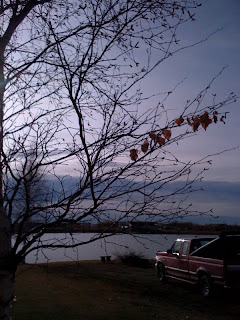 After deciding with my friend Sarah that the so un-pc term "indian summer" needed to be changed, I thought, why not Second Summer (like Pippin from Lord of the Rings suggests to Gandalf "what about Second Breakfast?"), as if it was the sequel the original.

Well, in Alaska this might seem like a bad joke, because our summers, which are short, are then sabotaged by a bout of rain in August. The rain heralds the end of the first part of the season, and our "second summer" feels like just a few days long.


There's a saying here that there are two seasons: Tourism and winter.
Which is pretty accurate, considering the autumn and spring each barely have a month to call thier own. However, the past two years have thrown us Alaskans for a big loop weather-wise, as we had the coldest summer in over a hundred years in 2008, and a record-breaking 100 degree (literally) turnaround in January of this year (from 50 below to 50 above in just 3 days). I was in Atlanta during this particular heatwave, and while I was biking to my part-time dishwashing job all bundled up, I was informed by a friend back home that in the dead of Alaskan winter, it was warmer in my hometown than the 30 degree "HOTlanta".

Which brings us to Summer of 2009, which is the hot version of last year. We've had beautiful sunny days, and it even got up to the mid 90s in July (again I was traveling out of state, why am I always gone for these things?).

After our usual half month of rain in August, the second summer seemed to have legitimacy this time, but like every year, had to end at some point. By the end of September, the frost and the snow came once again, and I broke out the long underwear and scarves. But just as it started to get really cold, summer seemed to be screaming "I'm melting! I'm melting!!!", and wouldn't go down without a fight.

So we've had another round of beautiful, warm days for the last two weeks, and are expected to have another solid week of this stuff. It appears we are in for a third summer this year, which I think is God's personal way of telling me he loves me (I do not enjoy cold weather, snow or the necessity of long underwear).

1. American Music by The Violent Femmes
2. David Comes To Life by Fucked Up
3. Boom Swagger Boom by Murder City Devils
4. Kick Drum Heart by The Avett Brothers
5. Sentimental Heart by She and Him (Zooey Deschanel and M. Ward)
6. At My Window Sad And Lonely by Billy Bragg and Wilco
7. Slow It Down by Larry And His Flask
8. Back Into Eden by Endless Mike and the Beagle Club
9. Poor, Poor, LA by Tim Easton
10. You Never Know by Wilco
11. St. Joseph's by The Avett Brothers
12. Lonely Anywhere by The Everybodyfields
13. When You Wake Up Feeling Old by Wilco

Looks like the little posse of leaves hanging out on the tree are chilling out, staying tune 'til winter finally kicks them off.