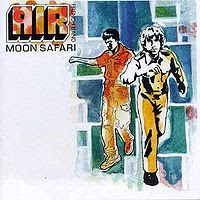 I've been pretty sloppy with my finances over the years, and decided it was time to NAIL it DOWN and get on my feet. So I'm taking this Financial Peace class, which is teaching me to write out and follow the dreaded B word. Budget. However, I'm learning that writing it all out and following it home is going to let me tell the money where to go, instead of wondering where it all went!

Writing things down and following through on these kinds of things always pays off in the end I've learned, so I'm pretty excited.

Speaking of writing things down, I just found this guy's blog, who is doing a review a day of every album in his collection, (1200 CDs and vinyls, and counting). Some of the reviews are pretty awesome, and he's about 172 albums through so far.


I took a cue from that and decided I'd write something, maybe not a review per se, but a memory or a story attached to various albums in my collection.

To start, I decided to tell about Air's 1998 debut "Moon Safari".
I first discovered this album while I was in a Youth With A Mission school in South Africa in 2005, and my friend Mary had it on her computer. Among the 18 other students, she was the only one with a laptop, which enabled her to use it as a stereo for us to all listen to during card games, reading or whatever quiet activities we did together.

This was one of the safe havens of living cooped up in a 6 story boys shelter in Johannesburg when there was nothing to do or nowhere to go (it wasn't a safe neighborhood to go exploring in).

This album is a masterpiece of chilled out electronic jamming and soothing vocoder-soaked vocals. I normally wouldn't be into this sort of thing, but I've got a soft spot for well-crafted pop albums like this. After I returned home to Alaska, I listened to this album all the time on my car rides to work or school, especially in the rainy or cold days. I haven't hardly listened to it in the last few years, but it remains one of those albums I can come back to anytime and still hear new things.

Key tracks: Sexy Boy, Kelly Watch The Stars, and Remember
Random fact: Sexy Boy was the song from 10 Things I Hate About You when they are tossing the flyers down the stairs.
Posted by art so troublesome at 9:27 PM