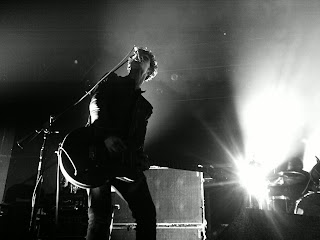 I got to see Black Rebel Motorcycle Club last night, and it was one of the best shows I've ever been to. Judging by the first half of the set, I thought it was going to be all new songs, but once they had played nearly all of their newest album, "Beat The Devil's Tattoo", they blasted into a classic after classic assault, which featured songs from each of their albums.

Sandwiched in between two middle-school aged kids and a 40-something couple, I enjoyed watching the kids amazed at what was probably their first rock 'n' roll show, hardcore fans screaming out their favorite songs, teens moshing, and the older crowd singing along in a haunted state.

One of the best parts of the set was when bassist Robert Been came out alone with an acoustic guitar and announced while lowering the mic, "This stage is too high, I feel like I'm too far away from everyone". He then sat on the stage about two feet away from me and my friend Eli, and played Bob Dylan's "Visions of Johanna". After the song, he shook Eli's hand and gave him his guitar pick. 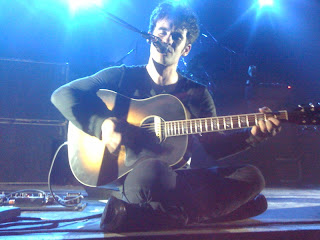 From there, they dove right back into their diverse catalog, with scorchers like "Weapon of Choice" and "Spread Your Love" and haunting songs like "Red Eyes And Tears" and "666 Conducer". Although their folk driven album "Howl" boasts some of the mellower songs of BRMC's canon, I thought that some of these songs were the most powerful and charged songs of the whole set. "Ain't No Easy Way" and "Shuffle Your Feet" had everyone stomping in a frenzy and they shouted along with the lyrics. 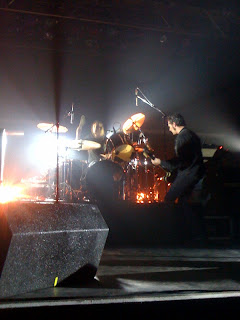 Above, guitarist Peter Hayes and drummer Leah Shapiro. To close the show, the band played "Open Invitation", the secret closing track from Howl. 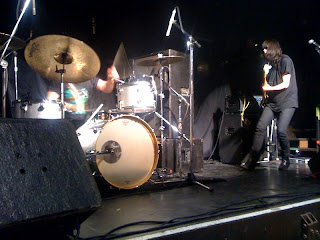 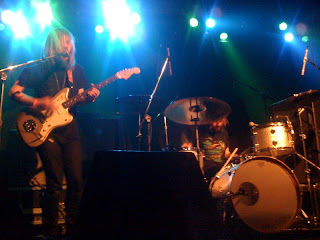 London trio Band Of Skulls (pictured above), who opened the show, were a great compliment to BRMC and I highly recommend checking out their debut album "Baby Darling Doll Face Honey".
Posted by art so troublesome at 10:29 PM