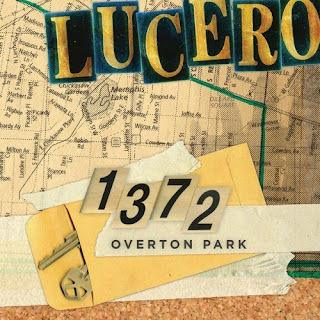 I recently took a trip to Nashville, Tennessee and caught a set from Memphis' alt-country-punk heroes, Lucero.

Though they're known for their raw recordings that embody the lifestyle of boozing, all-night drives, and hard luck, their new album, "1372 Overton Park" is a sizable step up in production and arrangement.

Producer Ted Hutt (The Gaslight Anthem, Bouncing Souls, Flogging Molly) brings a gleaming presence that gives each track a gritty-yet-warm shine that pulls you in and makes you forget what year it is, as all good music should.

The album, whose title is a reference to the famous Memphis park where Elvis Presley played his first paid gig, rightfully brings to mind a sense of American tradition that Lucero not only pays tribute to, but owns. The full horn section, organ, piano and pedal steel arrangements echo the maturity of Lucero's near 10-year existence and puts "1372 Overton Park" in the upper echelon of modern rock and roll classics, alongside The Gaslight Anthem's "The '59 Sound" and River City Rebels' "Keepsake Of Luck"

While knowing going in that they are accustomed to playing for 3-plus hours, I stood up front for the whole show and was upset when they didn't keep playing highly requested songs all night.

I raised my glass and shouted for more, but after two hours and a short encore, the band retired for the night and announced, "We'll see you tomorrow night". I wasn't able to attend the second night, as I was heading back home to Minneapolis, but at least I get to listen to this album as much as I want, close my eyes and get lost in Overton Park.
Posted by art so troublesome at 3:24 PM